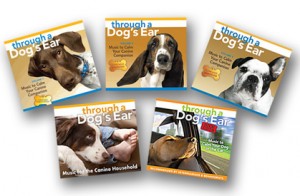 Don’t let the cover art fool you.  This series of CDs is my favorite tool for deep relaxation—whether it be for my dog, my meditation practice, or my students’ Savasana.  For those of you who don’t know, one of my passions (besides yoga) is anything related to dogs, especially if it might help my reactive girl Tasha.  So a few years ago, I flew to Ohio and attended a dog training seminar on tools to help anxious and reactive dogs.

One tool they mentioned was music, specifically the CDs in the photo above. I was skeptical at first, but the trainer used a video to prove her point. It showed a dog literally climbing off the walls, as its exhausted owner tried not to cry.  When the trainer popped the CD in the stereo, the transformation in the animal was nothing short of astounding.  It stopped jumping, barking, and running in circles to lie on the floor and listen.   Proof enough for me.

I had my chance to try it a few days later. My girl was in major freak-out mode over the mailman who, according to Tasha, is an ax-murdering psychopath just waiting for an opportunity to break into her house.  I turned on the music and waited. Tasha stopped barking, walked up to the stereo speaker, lay down and sighed.

Intrigued, I did some research.  I won’t bore you with all of the details, but if you’re interested, you can read about it here. Turns out, canines and humans have something in common. We’re both soothed by music that is:

I wondered if my yoga students would love it as much as Tasha did, so I snuck it into the studio’s CD collection.  After they got done snickering about the dog on the cover, my students started asking me where they could buy it.  I now carry it at the studio, and it outsells even the yoga mats.

There are several CD’s in this series, so you can experiment to find the one you like best.  My personal favorite is Volume 1.  Not surprisingly, it’s also the volume the researchers found to be the most profoundly relaxing for their canine test subjects.

I hope you try one of these CD’s and you find it as deeply peace-invoking as Tasha and I do.  Let me know what you think!

One thought on “Music to Soothe the Stressed-out Yogi”